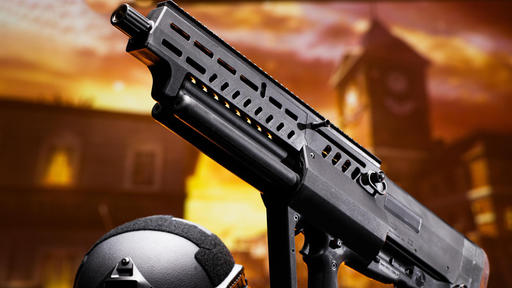 Have you ever shot the Tavor TS12? It’s a beast and for sure a different looking shotgun. I first encountered it at the SHOT Show Range Days, as it was released to the public.

It’s made by IWI and feeds from one of three individual magazines which can hold up to five shotgun shells each, for a maximum capacity of 15+1 rounds. It also automatically loads a round in the chamber once you rotate the next magazine into its position. 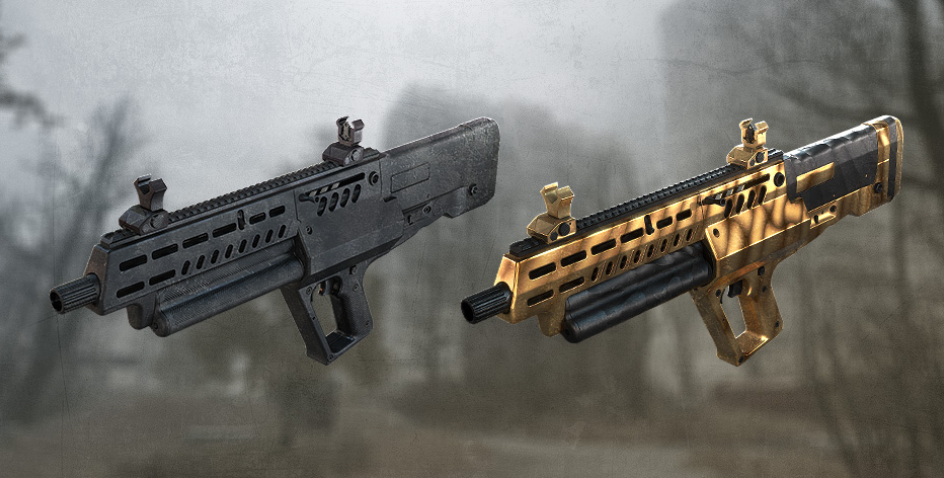 The Tavor TS12 12 gauge shotgun is a gas regulated bullpup shotgun with an innovative design that feeds from one of three (3) individual magazines which can hold four 3 inch shotgun shells or five 2 ¾ inch shotgun shells each. This means that the potential overall capacity from all three (3) individual magazines is 15 rounds plus one additional round in the chamber. The TS12 has a unique feature that automatically loads a round in the chamber once the subsequent loaded magazine is rotated into position. It can be fed and unloaded from either side.

Additional features of the TS12 include four (4) sling attachment points, M-LOK compatible rails, a continuous Picatinny rail on top, Benelli/Beretta choke tube compatibility, and the reliability expected of all IWI products. Although the TS12 has an 18.5 inch barrel, the overall length is still only 28.34 inches.

The TS12 offers an innovative an versatile and compact sporting or home defense shotgun that is optimized for whatever application you need. 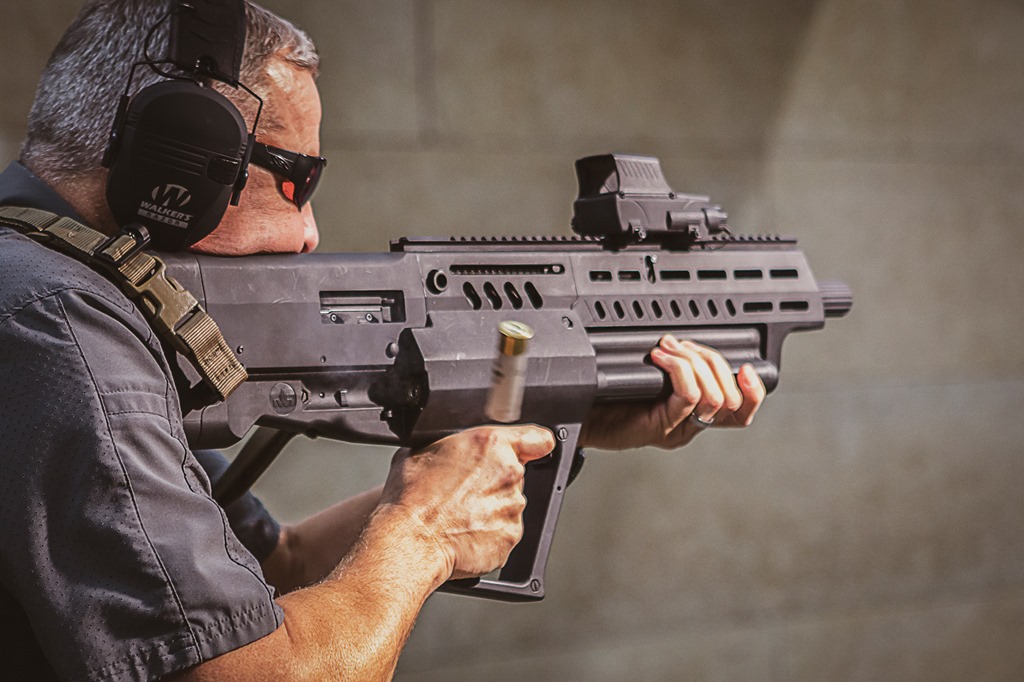 Making a big splash at SHOT Show 2018, the IWI Tavor TS12 shotgun was impossible to walk by without noticing.  Even at early hours, there was a line to pick up and handle this thing.  This author was expecting a lot more heft, but even at roughly 8lbs unloaded, the Tavor TS12 shocked me how light and well balanced it felt.  The balance improves even further when fully loaded with roughly 1.25lbs of shotgun ammo.  It has been a long time coming to market, however, due in large part to IWI wanting to perfect the shotgun’s reliability with a wide range of loads before it got into consumer hands.

The bolt handle, bolt release, trigger, magazine rotation lever, safety, bolt hold open, loading port, and shell release are all located close to each other near the grip.  this makes for easy enough manipulation whether loading, firing, or unloading the shotgun.  The trigger pull on my sample was quite good.  Trigger movement was straight back.  There was a bit of initial movement, and then the trigger broke crisply at an average of 8lbs, though it felt lighter.  Reset was audible, tactile, crisp and short.

The controls feel solid, are ambidextrous (with the exception of the bolt release).  Though the TS12 preproduction prototypes had the ability to change the ejection port from R to L, this feature has been omitted from production models.  There will be RH and LH specific models on the market in regards to ejection.  The M-LOK slots on the forend make for easy attachment of lights and other necessary accessories for a defensive shotgun.

Though its height of 10.23″ without an optic or sights is taller than most shotguns, its 28.3″ in length renders this 18.5″ barreled shotgun rather compact, only about 2″ longer than the diminutive KS7.  The compactness of the Tavor TS12 made it fit into my old Blackhawk! discreet case.  Its excellent balance and flexibility of sling configuration also made it easy to carry while doing ranch chores and even on a mountain bike.  The TS12 also fit into a few of my daypacks for even more discreet carry if needed.  Not bad for a 12 gauge shotgun with 15 rounds on board.

When it came to carry inside of a vehicle, the compact Tavor TS12 gives one a lot of options.  Contained in the case, the TS12 was super easy to conceal in my truck and became my favorite shotgun to roll around with.  Around the house or in an RV, it will be a great option for a compact concealed firearm with quite a bit of firepower on board.

As far as carrying the TS12 from a sling, there are multiple options.  The Tavor TS12 has two QD cups on each side of the gun.  They are located in front of the chamber and just forward of the toe of the stock.  Between these four locations, one should be able to find a sling configuration that fits ones needs.  If further flexibility is needed, the M-Lok slots and picatinny rail provide even more options.

We did not receive any manual with the preproduction version of the Tavor TS12, but the basics are pretty simple.  To change from the “L” to “H” setting, one simply grasps the charging handle, wiggling it outwards. Using the charging handle as a tool, insert it into the notch on the setting drum, and move it up or down accordingly.  Reinsert the charging handle into the bolt and you’re good to go.  Once I practiced this process a few times, it took me less than 10 seconds. 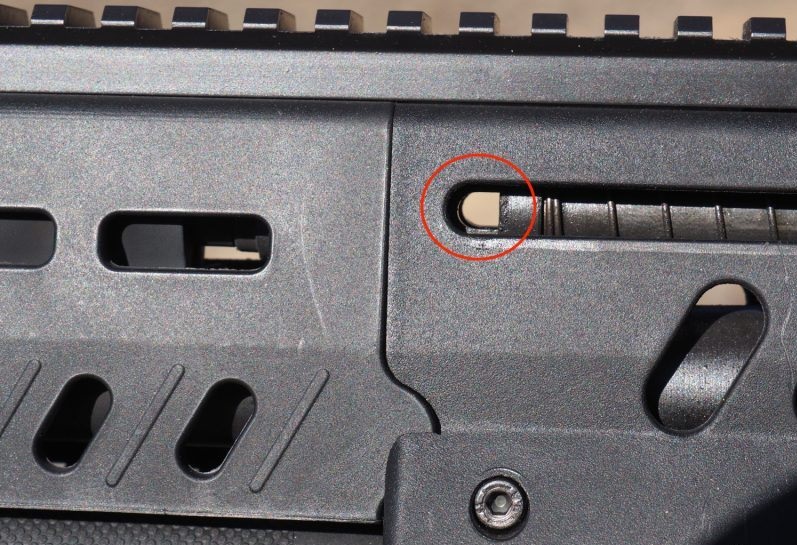 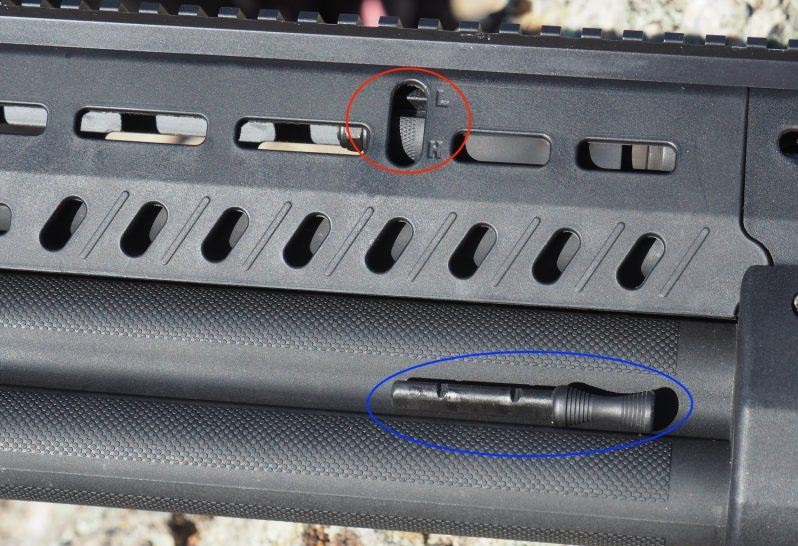 3. using the bolt handle as a tool, set gas as desired for L or H power loads 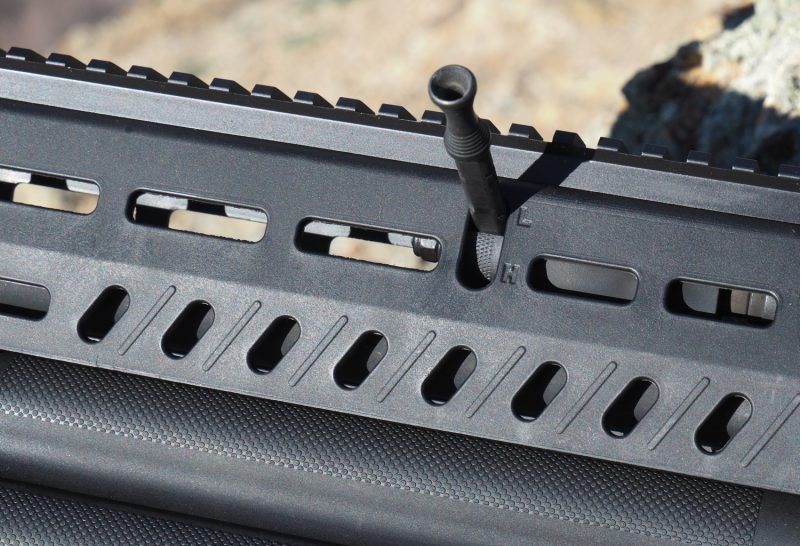 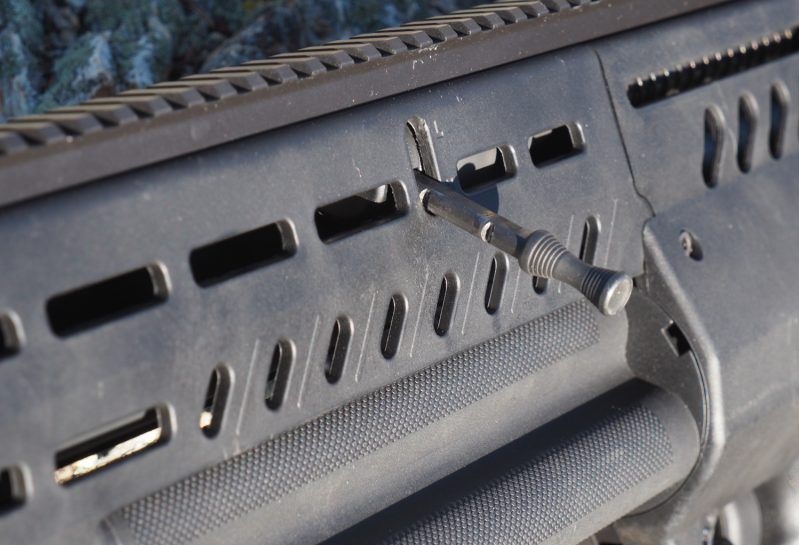 To load, one can load shells into the magazine tubes on the left and right side of the shotgun.  Once these tubes are full, one can rotate the tubes in the direction of one’s choice to expose the third magazine tube.  If the bolt was locked back prior to loading, the bolt will automatically close and chamber a round when a loaded magazine tube comes inline, so be aware of this. 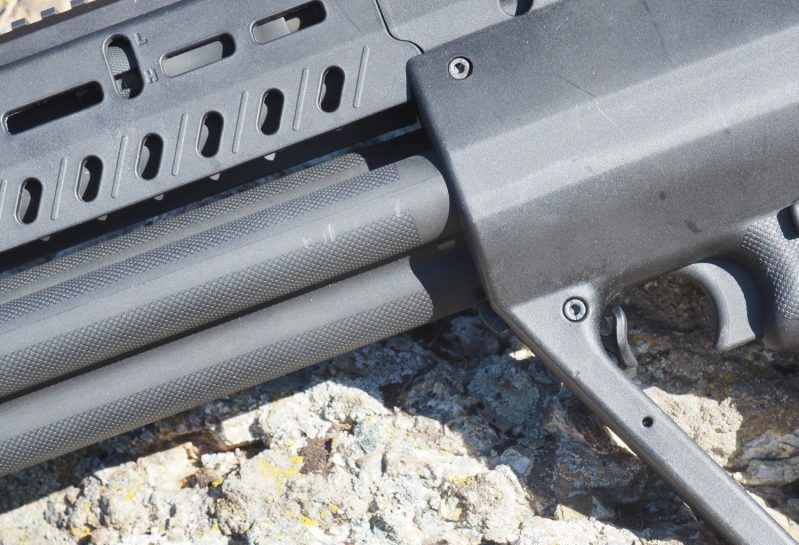 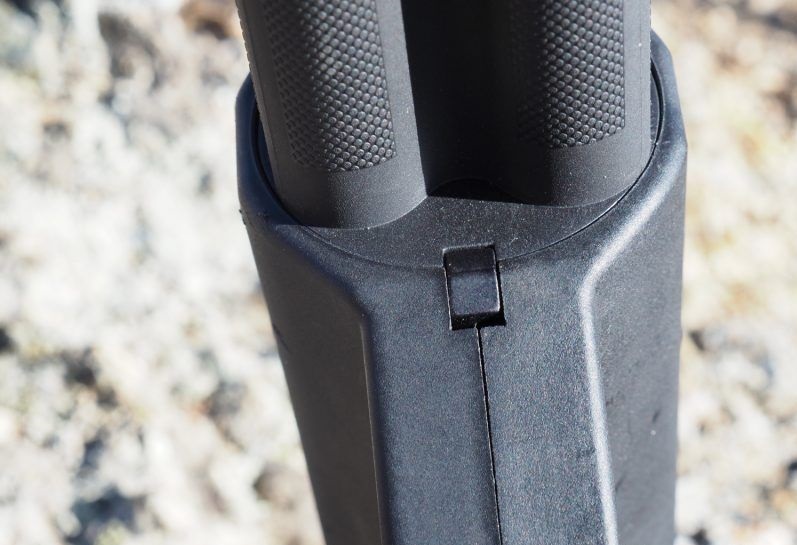 Rotating to the next tube 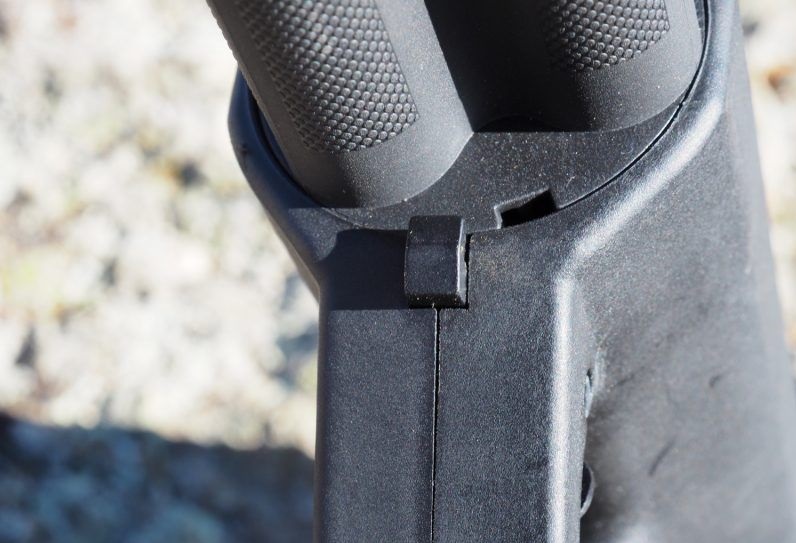 Once loaded and on target, you’re ready to send projectiles downrange.  When one has emptied a tube (in little to no time at all), one can press one’s trigger forward to release the magazine tube rotation lever, which reminds me of an upside down Galil ARM magazine release.  The shotgun will automatically recharge when the tube comes inline underneath the bolt.

The TAVOR TS12 features a unique patented “Bullhead” bolt locking system, specific to the TS12. The 18.5-inch smoothbore barrel with a three-inch chamber is fed rounds through a tubular magazine system that automatically loads the next round when the tube is rotated in position. The muzzle threads are internal and compatible with Benelli®/Beretta choke tubes. One choke tube is included with the TAVOR TS12.

Compact in length at only 28.34-inches, the TS12 has a one-piece, full-length 1913 Picatinny top rail with M-LOK receptacles integral in each side of the forearm of the shotgun body, allowing multiple placement possibilities for the addition of accessories.

Honestly, the best thing about the IWI Tavor TS12 is the shooting experience.  This thing absolutely churns through ammo.  Hammering out up to 16 rounds per loading process, the empty hulls will pile up at one’s feet in a hurry.  There’s a huge amount of satisfaction in how quickly you can keep the gun running. With a forward movement of one’s trigger finger to the magazine rotation release lever and a flick of the wrist of one’s support hand, the bolt automatically runs forward and recharges the chamber from a fresh tube. 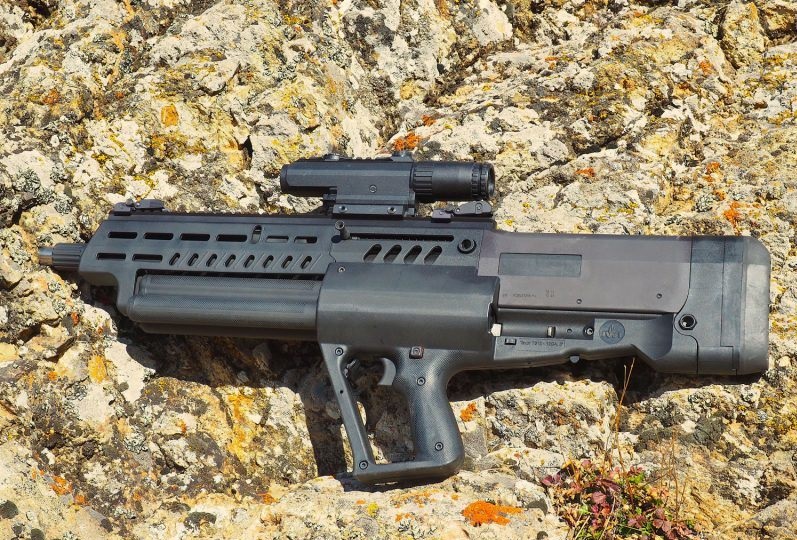 The crisp, positively resetting trigger made fast splits facile, with a magazine tube running empty about as fast as I can shoot from any shotgun.  This includes the notably fast Winchester designed action of the FN SLP12.  Shooting with iron flip-up sights and a low power optic (A Leupold Mk 4 I used purely due it’s space-age aesthetic) resulted in completely devastated A-zones at common defensive distances out to 25 yards with buckshot and 50 yards with slugs.

Though I fired some 3″ loads that would be rather stout in other shotguns, especially ones with a bullpup layout like the Tavor TS12,  recoil on the “H” piston setting was not brutal.  I give the Tavor TS12 especially high ergonomic marks in how one’s cheek rests on the stock.  I never felt any uncomfortable recoil energy transferred to my cheek in all the rounds I fired. 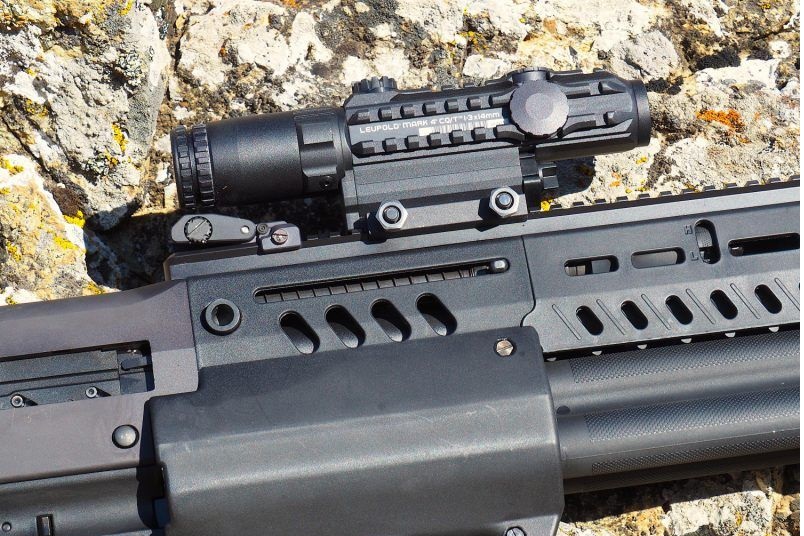 Comparism Between Tavor TS 12 And Other Similar Shutguns

In comparison to other similarly laid out shotguns that I have fired such as the AA-12, Hi-Standard Model 10, and the KS7, the Tavor TS12 was by far the most enjoyable shooting experience.  I had no discomfort churning through 100 rounds at a time.  In comparison to conventionally laid out shotguns, the Tavor TS12 is nearly identical in length to a Mossberg 500 Cruiser, yet eminently more shootable.  I have not had the chance to fire the roller-delayed removable magazine SRM1216 in comparison, but have handled one.  The build quality, balance and controls of the TS12 felt better than the SRM1216. 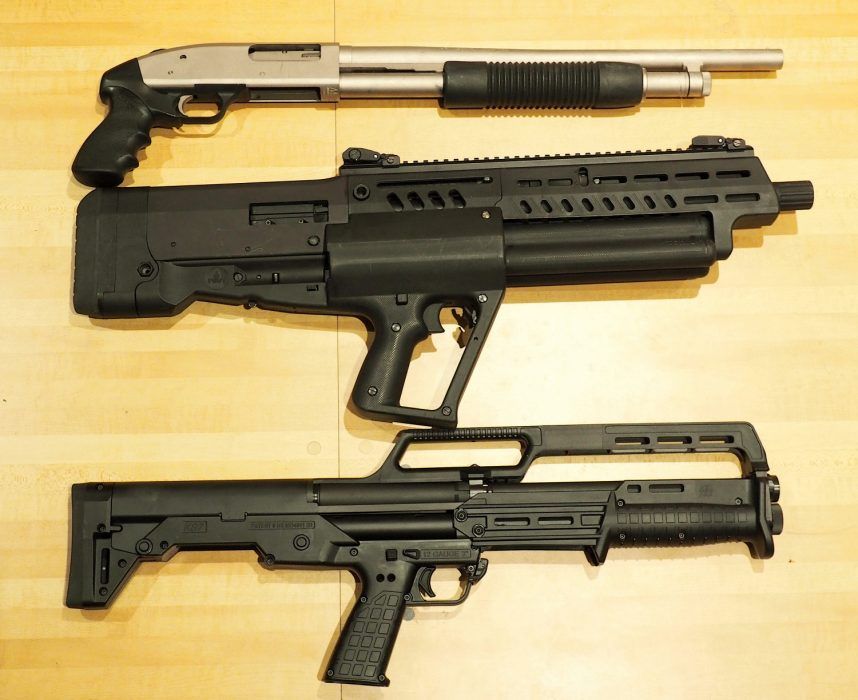 Besides the most fun way to unload the TS12 by sending lead downrange, administratively unloading the shotgun is easy enough.  Pressing the magazine tube unloading button on either side of the shotgun will send a shell out of the left or right aligned magazine to a catch that prevents the shell from hitting the dirt. 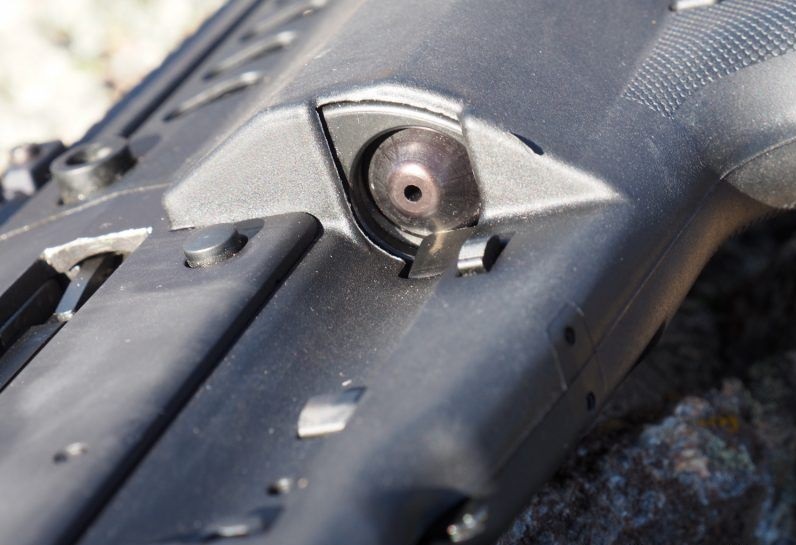 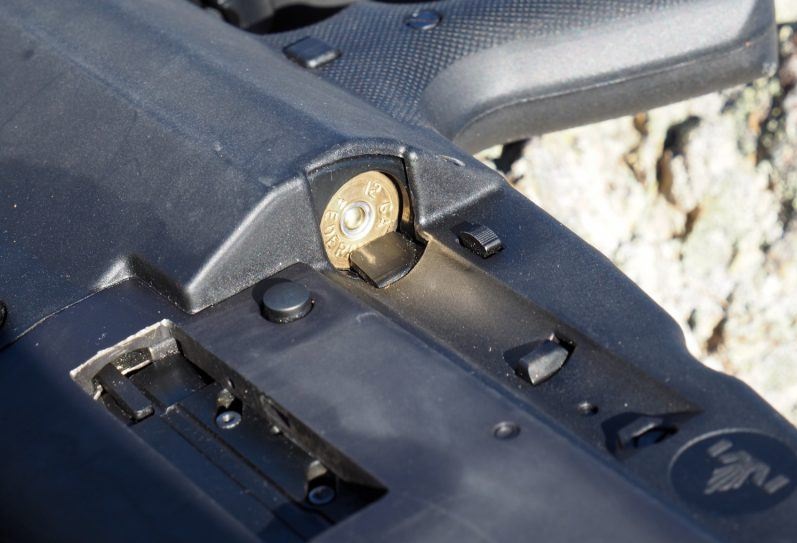 Magazine tubes are easy to unload, shells are retained by a catch so they won’t tumble to the ground 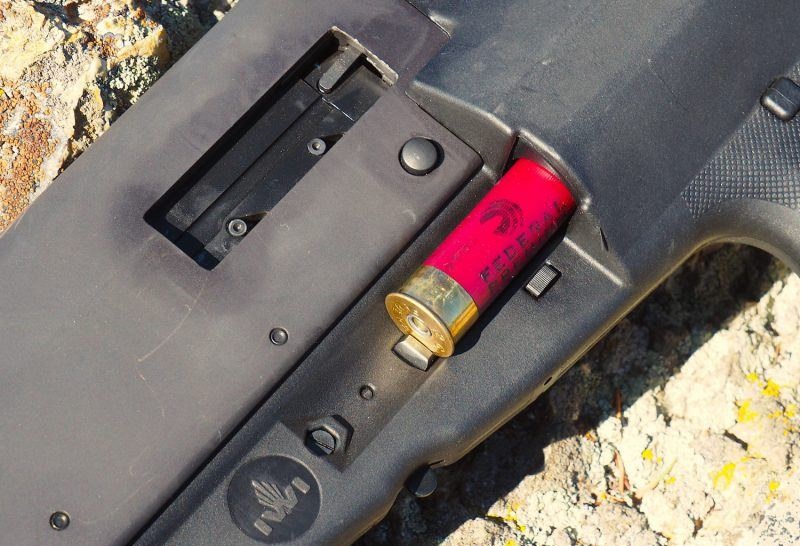